Staying here in an Internet Cafe in Cala Llonga on the east side of the island. We went through around 2 hours in Ibiza today, me simply touring, moving up to the fortification and taking pictures, Theresa at long last completing her keepsake shopping.

>From around 1 pm on we have been spending our most recent couple of hours at Cala Llonga, a lovely sea shore, set in a profound bay, where we have been unwinding.

Yesterday was by a wide margin the most energizing day. We took a ship from Ibiza to Formentera with the Balerias vessel called Ibiza Jet. (29.80 Euros for as far as anyone knows the quicker ship at 25 minutes, it despite everything took us 40 minutes to get over to the next island.)

Formentera is significantly littler than Ibiza, around 82 square km contrasted with around 580. Furthermore, it¥s for all intents and purposes level, with just two regions with a long sloping height. The most noteworthy point is on east finish of the island, at Far de la Mola, rise about 200m.

Us leased 2 engine bikes to find the island, which was totally the best thought and the best time. We had 2 little Piaggio programmed bikes with a 50 cc motor, top speed around 70 km/h. An expense of 20 Euros per day, bad head protector notwithstanding.

We booted around the entire island, Far de La Mola, Far des Cap de Barbaria. A practically lunar scene with numerous little figures of rock that more likely than not been worked by different sightseers.

At that point we proceeded onward to Platja de Cala Saona, most likely the most pleasant sea shore on the island, set into a rough landscape. Most different sea shores we saw (Es Copinar, Es Arenals on the south side of the island) were extremely level, sandy sea shores, with minimal grand intrigue.

Be that as it may, the shade of the water, as anyplace on the islands of Ibiza and Formentera is genuinely astounding dark blue water with turquoise and light blue patches. I couldn’t accept the hues when I originally observed them.

In the wake of giving our bikes back, we got the more slow ship back at 7 and landed in Ibiza Harbor at about 7:30. At the same time remaining outwardly deck and getting a charge out of the cool air and the air of an approaching nightfall. At that point we just looked for supper at the neighborhood Spanish “Walmart” and had a peaceful supper back at the hotel. Despite the fact that it wasnt so peaceful all things considered, it was karaoke night at the Gold Crown bar and there was numerous a vocalist who wasnt truly intended to be before a mouthpiece.

At long last around 12 PM the frenzy faded away and I could find a good pace. All things considered, tomorrow is our last day in Ibiza, our last opportunity to appreciate the Mediterranean. Today around evening time we will appreciate some evident nearby Spanish moves in the town of Sant Miquel. Ought to be interesting…. 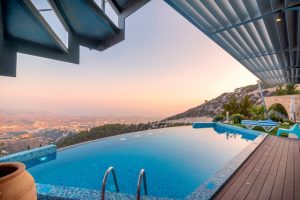